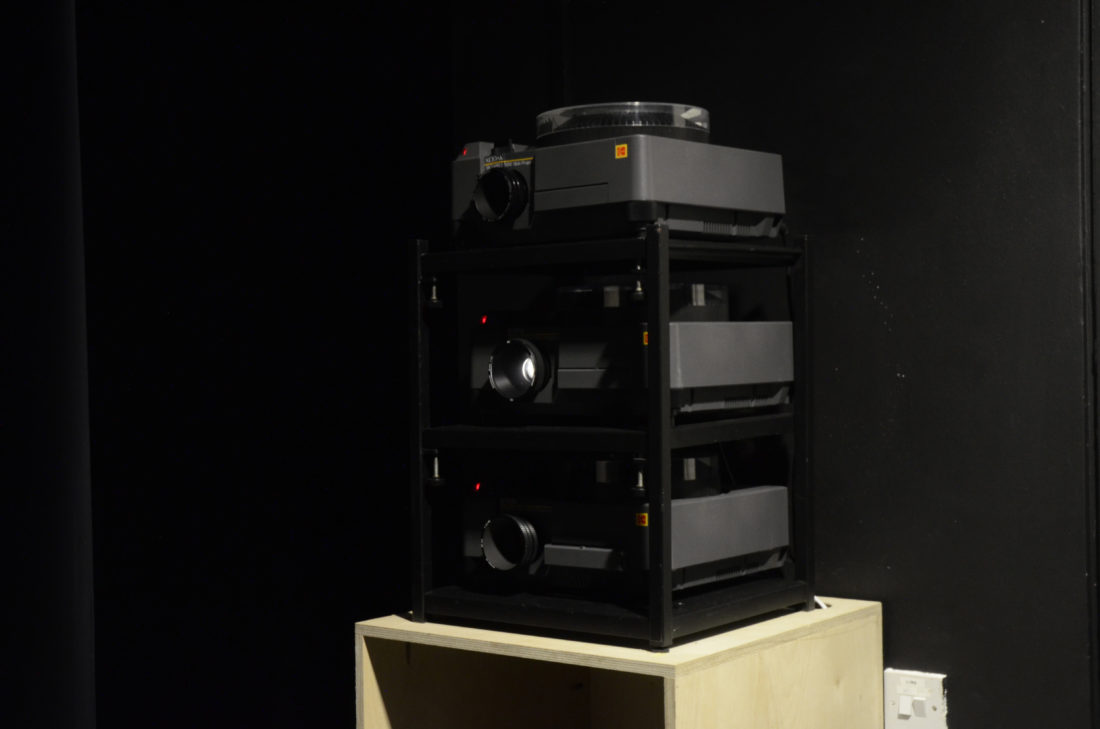 The iconography of the 1913 Dublin Lockout is dominated by two contrasting photographic images, both made by Irish photographer Joseph Cashman (1881 – 1969). The first is the image of an individual – the trade union leader Jim Larkin, arms out stretched addressing a crowd on Dublin’s O’Connell Street, shortly after his return from America in 1923, and some time after the events of the Dublin Lockout. Larkin’s pose in this photograph was used by the sculptor Oisin Kelly in his 1977 bronze statue of Jim Larkin which stands in O’Connell Street.

The second photographic image is different– it shows not an individual but a large crowd viewed from elevated position and dated from the time of the Lockout itself. It shows members of the Dublin Metropolitan Police baton charge a large crowd who were listening to Jim Larkin address a meeting on O’Connell Street on 31 August 1913 during the Dublin Lockout. Larkin was arrested and two people were killed during the riots that followed.

This second photograph forms the basis of Projection (Baton Charge 1913). The work consists of a sequence of projected 35mm slides showing detailed enlargements of the photograph to various degrees, and at times to the point of abstraction or obliteration. The sequence of images push and pull between figure and ground, between individual and the collective mass, between analogue grain and digital pixel, between closeness and distance.

Over and between these images two voices ‘off screen’ conduct an ambiguous dialogue. Their fragmentary utterances address both the images and each other – an exchange that is a conflation of visual metaphors, the photographic apparatus, subjective and historical processes.

This is the most recent work that evokes the ‘history of photography’ and deploying what can be called a ‘reprographic’ approach. Images are appropriated, manipulated, cropped, sequenced and re-contextualized with soundtracks that attempt to open up new embodied encounters with the viewer.

This work was developed for the group exhibition Exiles curated by Alison Pilkington at The Lab Gallery , Dublin 15th March – 20th April 2013, and in association with Five Lamps Arts Festival and its theme commemorating the centenary of the Dublin Lockout of 1913

Both images mentioned in the above text by Joseph Cashman are accessible in digital form from the RTE Archives Stills Library, which holds the copyright of the images following its purchase of the Cashman collection of 674 glass plate negatives in the 1980s. Digital scans of the images were made in the 1990s and since 2001 the original 5 × 4 inch glass negatives are held in National Photographic Archive of the National Library of Ireland.

Joseph Cashman started his working career in Guys of Cork and soon moved to the Cork Examiner where he served his time to the photo-engraving trade. He worked at the Freemans Journal during 1916, however he spent most of his life free-lancing, and his studio was located at 21 Capel Street up to 1931. He spent a brief period of time with the Irish Times during 1926/7. In 1931, Cashman moved to the newly opened Irish Press where he established the engraving and photographic departments.
(Source: RTE Archive)